Biochar is a carbon-rich product, created by the slow burning of plant material with little or no oxygen.

Plant waste is heated to temperatures of several hundred degrees celsius in a pyroliser, a vessel from which oxygen is excluded so it does not burn. Instead, gases and liquids are driven off, which can potentially be used as fuel or agricultural treatments. The remainder turns into a dry, carbon-rich solid similar to charcoal.

Scattered on fields after being inoculated, biochar helps raise crop yields and reduces the need for fertilisers; and as it is a very stable substance, the carbon it contains is locked away for thousands of years. As that carbon had been absorbed from the atmosphere as the plants grew, what we have is a net removal of carbon from the atmosphere and storage in soil. The reduced need for fertilisers will have further benefits as both the production and use of fertilisers in industrial agriculture are associated with considerable greenhouse gas emissions.

Despite the obvious benefits, some are urging caution, expressing concerns about inappropriate incentives rewarding logging, or burning of food surpluses, for biochar; or indiscriminately spreading biochar on crops that would not benefit. Nonetheless, small scale and locally appropriate use of biochar is hard to argue against. Biochar kilns are relatively inexpensive to buy, or DIY solutions can be constructed. 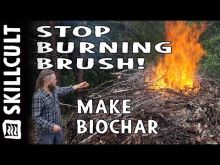 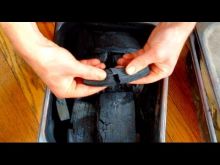 Biochar - Making it in the wood stove AND heating our home 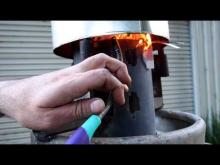 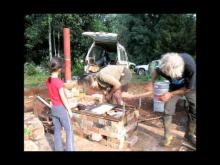